The official tourist route guidance system of Berlin is to be extended. Moniteurs and the office PSY:PLAN were commissioned by the city of Berlin to conduct a comparative study. The aim was to analyze the tourist route guidance systems of ten major cities and to examine the extent to which the contents and concepts of other systems can be transferred to a guidance system in Berlin. The cities studied were Dresden, Potsdam, Düsseldorf, Frankfurt, Bristol, London, New York, Sydney, Vienna and Zurich.

A component of the comparison is the analysis and evaluation with the handling of the low barrier and inclusive requirement.

A competition was launched in the second half of 2016 to design the additional element of the information system.

Phase 1 Extensive research on the internet via professional publications, collection of material such as photos, signage locations on the city guidance systems under study for subsequent analysis.

Phase 2 Workshop with responsible persons from Berlin.
As part of the comparative study, relevant stakeholders were involved at an early stage. Together, the procedure, the comparison criteria used, supplementary information, questions and special features were developed.

In addition, personal interviews were conducted with responsible persons from the tourism industry in Berlin. Detailed information, data and facts about tourism in Berlin as well as in-depth
information on the pedestrian traffic strategy, hints on chances and risks for a future information system in Berlin.

Phase 4
Informal survey of residents in the ten cities.

A short questionnaire was developed and evaluated. 23 people in the 10 cities participated in the survey.

Phase 5
Documentation of the study
A 500-page documentation was produced which, in addition to the comparative analysis of the cities according to selected criteria, examines aspects such as protection against vandalism, innovative developments, and the opportunities and risks of a tourist guidance system for Berlin. 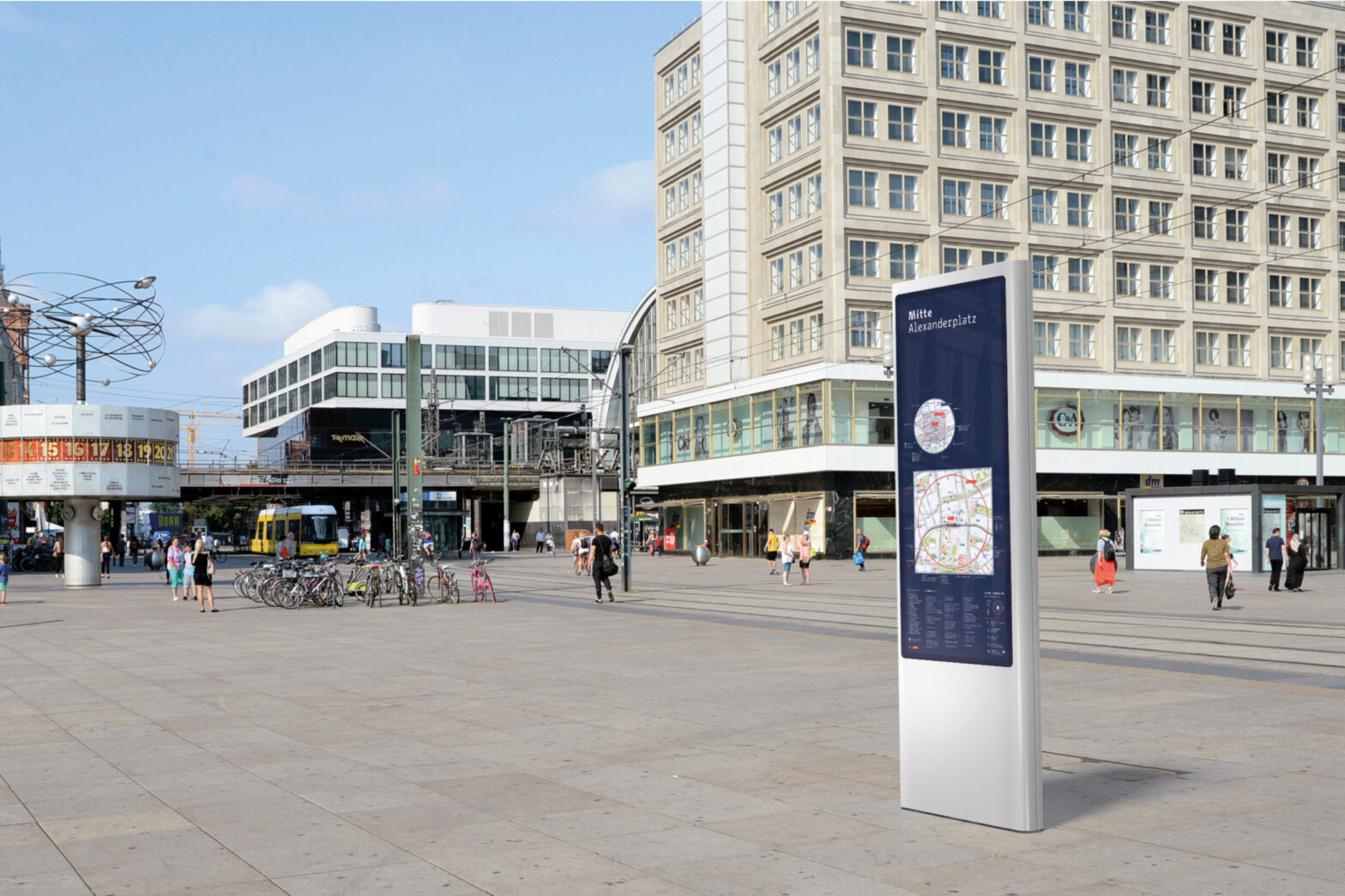 Berlin is an attractive tourist destination. Many tourists come to Berlin to visit new and old places. The city of Berlin decided to install a pedestrian wayfinding system to the main tourist destinations throughout the cityscape. A three-part system consisting of an information stele, arrow signposts and object boards. Moniteurs was invited with 9 other agencies to the design competition, the basis of which was the comparative study conducted by Moniteurs, commissioned by the Grün Berlin Stiftung in 2016.

Moniteurs developed three types of stelae with maps of the surroundings, texts and images to complement the existing arrow signposts. An integrated guidance system and information concept for Berlin that connects history and the future, conveying a strong identity that gives visitors:inside the feeling of having arrived at the right place: You are in Berlin.